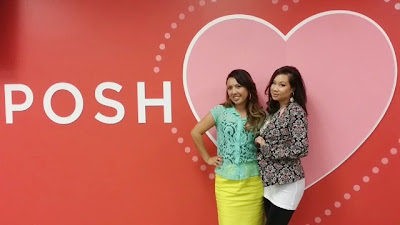 The great thing about Poshmark is that you can join a Posh Party from anywhere.  I’ve Posh-partied when I was at another party, when I’m on vacation, I even hosted a party when I was on a date!  But for today’s Posh Life photo-a-day challenge, the question is “Where do you #PoshParty?” and my favorite place to Posh Party is at a live Posh Party!
There recently was a live party at the Poshmark HQ in the Bay Area, so I called up my girl, who’s been with me to plenty of live parties, including helping me host a party at the old HQ a few years back on my 30th birthday.  She had no hesitation, because we both know there’s no party like a Poshmark party. 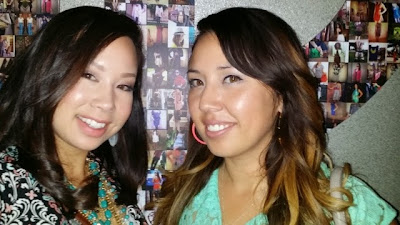 We wore the wedges for the red carpet!  Going to a live Posh Party gives you a reason to dress up and wear those shoes you’ve always wanted to flaunt. At the check in table, I picked up a few drink tickets (with the cutest Posh quotes on them), some stickers and pins, and a ballot to vote for my favorite look. First stop was to the bar area.  There are two areas set up at the HQ now.  I tried both of the Posh drinks that night: the Tiki-Rita (pineapple juice, tequila, sweet and sour, and lime) and the Easy Peasy Lemon Squeezy (lemonade and vodka).  I also enjoyed some deviled eggs, fruit and cheese, and some delicious chocolate and cheesecake treats.  Those were devoured before I could even take a photo! 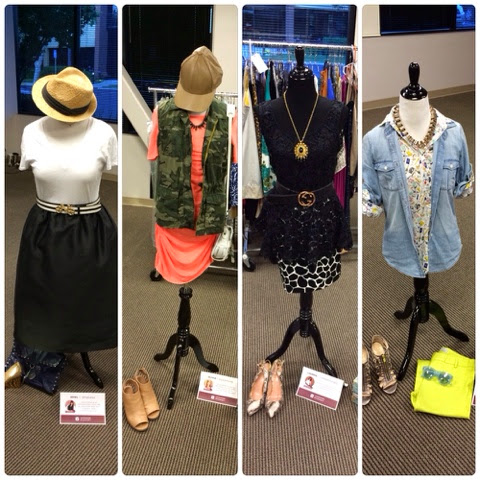 There were 4 looks set up put together by some Posh ladies, and it was so hard to vote for one!  I cast my ballot for the look on the right, by Emily aka @sparklemeetspop, since I was wearing a similar look with a neon bottom. I also made sure my friend hit up the activation station, since she didn’t even have Poshmark yet!  She’s been around with me since the beginning, but she never got a chance to join when they introduced the app for Androids.  The ladies at the station got her all set up.  If you ever attend a live party, make sure to bring some ladies who do not yet have Poshmark….they’ll definitely want to join! I like to think that Poshmark helped perfect the mirror OOTD photos.  It wouldn’t be right if I didn’t take at least one mirror selfie in the Posh Studio. Going to Poshmark Parties also gives you a chance to really show your Posh Love and wear some of your Posh Finds. I’ve grown my Tiffany & Co. collection since Poshmark (and at amazing deals), so I decided to wear a few pieces for the night. Be prepared if you are going to a live Posh Party.  Expect to take hundreds of photo with the multiple backgrounds and crazy props.  Wear an outfit that makes you feel good!  The theme of the party was “Style Obsession” and my obsession is hard to pin down, so I decided to rock a few: neon, lace, Tiffany, and peeptoes! There even was a photo printer to print out a fun keepsake for you.  Although we are in a digital world, it feels good to have physical photos once in a while!  I really made sure to utilize the props in the studio and pulled up a stool to pose for these photos.  Felt like I was 16 again! Posh Parties also means there will be other Poshmark lovers there, including those behind the scenes.  The Poshmark crew is the friendliest (and most fashionable), and if you ever happen to see them in the flesh, don’t hesitate to say hi and take a photo. 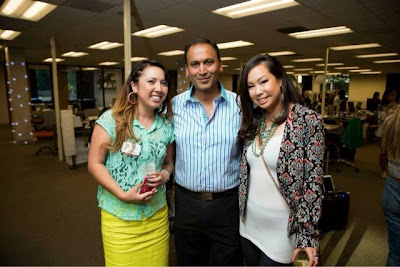 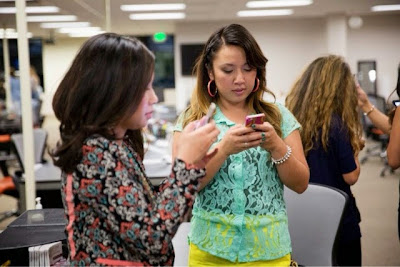 Don’t forget, since it is a live Posh Party happening at the same time as a virtual Posh Party, you would expect to see people on their devices partying in the app.  After all, it wouldn’t be a Posh Party without the app!  I had to take a few moments to share some items in my closet to the party theme.  Looks like we got caught in this photo by the Poshmark camera crew.  We’re not being rude….that’s just how we party! Another thing I try to do when I go to a Posh Party is wear something I want to wear something one more time before I put it on Poshmark.  Take it on its last stroll…and then list it.  So that’s exactly what I did with these Christian Louboutin peeptoe wedges.  I enjoyed my night partying in these one last time, but now, I’m ready to let go and let another Posh lady enjoy these babies.  That’s what Poshmark is all about right?
Check out the listing here.
If you see a Posh Party coming to your city, RSVP and make it happen.  If nothing is happening in your area, there is even a PoshFest coming up in November in San Francisco.  I might just see you there, since I missed the first PoshFest in Las Vegas.

1 thought on “The Posh Life: Why You Should Go to a Live Posh Party”